I am preparing for the birthdays of two of my sons tomorrow.  One will be 24 and is married with a baby daughter; the other is turning 15.  I am fresh out of babies!!  It seems only yesterday that my 15-year-old was born.  It was a surprise because we had no idea we were having a baby!  We had gone Christmas tree shopping the weekend before.  As my two older boys (13 and 9 at the time) were decorating the tree, the younger one (the story is still in dispute between these two!! Ha-Ha) stepped on a broken glass ornament behind the tree.  As the older one lifted him over a small dividing wall, blood was dripping down.  We realized right then that it was going to be a doctor’s visit and stitches pretty quickly.  So our day and evening was a chaotic one! Our younger son came home on crutches and would be missing out on the local soccer tournament the following day. His dad was coaching his team and both my husband and older son were signed to referee the tournament.  We got home around dinner time and dealt with a 9-year-old who had stitches in his foot and a 13-year-old denying any complicity!  Later that evening, we had a phone call from the cousin of a good friend.  She recalled a conversation we had at a family bar-be-que FIVE years prior, and she asked us if we still wanted a baby to adopt.  I never hesitated.  I immediately said, “Yes.”  And then I said, “Hang on; let me be sure my husband is okay with this!!”  He was very okay with it and the next morning, our son was born.  I took my 9-year-old on crutches with me to WalMart (my older son and husband went on to the soccer tournament).  I grabbed a baby blanket and a car seat and headed to the hospital.  When the nurses greeted us, they were awesome.  They had me back up my car to the entrance and loaded us up with all sorts of baby things – bottles, diapers, blankets, t-shirts, socks.  It was so unexpected but wonderful.  We loaded him up and off we went, to introduce him to his father and older brother at a soccer tournament!  What a tournament that turned out to be! He was the hit of the day!  Newly born, wrapped in blankets against a chilly December day, and sleeping sweetly in his car seat.  From the moment I first held my son at just a couple of hours old, I loved him.  It is amazing to me how much God allows us to love.  We are the ones with the hang-ups; God wants us to love all people.  And I could not love this young man any  more, had he been brought forth from my own loins.  He is my son. Period.

It is interesting to me that people feel free to comment and criticize adoptive parents, families, and the process, especially if there are differences in race in the adoption process.  It is like complete strangers stroking the belly of pregnant mothers.  People seem to think it’s okay to comment on the make-up of our diverse family. My response to people initially was, “Where were you; where was your community, when no one wanted this child?”  My husband and I never hesitated in welcoming this child into our home, hearts, and family.  My other sons love him like they love each other; there is no difference.  There are differences due to age, but the two older ones have that, too!  He has blessed us more than he will ever realize.  I know God needed me to love this young man and to have him hold a part of my heart forever.

At this time of year, I am drawn to the story of St. Joseph.  An angel appears to Mary and she accepts that God’s will be done and that she will bear the Son of God.  Now, imagine:  Mary is already betrothed to Joseph and she finds out she is pregnant, but not by Joseph, as she is still a virgin.  First of all, I don’t think we in the West truly have a grasp on what betrothal means.  In the East, the betrothal is declared after the couple have met with their priest, their parents (if it is appropriate) have agreed with the impending marriage, and the couple agrees to the wedding (usually about a year away).  The couple has a formal ceremony, wherein they make their vows and exchange rings.  They continue to meet regularly with their priest and plan their wedding with their families.  At the end of the betrothal period, the couple finalizes their agreement and is married by the priest. In the East, the priest marries the couple.  It is not like the West where the priest is just a witness.  The sacrament is conferred by the priest.  And the wedding closes a year or more of preparation.  It is a process and the church community, the priest, and the families are all a part of it.

So let’s place St. Joseph in this.  He hears rumors; Mary has up and left to visit her cousin. He has no idea what’s happening.  The little community is abuzz with gossip.  The Romans are talking “census” and the political climate is stressful, to say the least.  Mary makes her way back to town from visiting Elizabeth, where she felt her Child communicate with His cousin, John the Baptist.  Their relationship would grow over their lifetimes into something amazing.  As Mary is traveling back to Joseph, an angel appears to Joseph and tells him everything is okay; Mary is to bear the Son of God, and he needs to take her as his wife.  Mary comes home, Joseph accepts her and they marry.  I can only imagine all the gossiping about that!  (People gossiped badly back then; just as badly as they do today.  And what is sort of sad is that it probably wouldn’t cause too much chatter in our current moral climate!)  Right when they are wed, the Romans tell everyone about the census requirements and Joseph has to take his very pregnant wife with him, so he can be counted at the town of his birth (can you imagine the world having to be part of a census like that now?  Where would you have to show up??). And Joseph never hesitates. He does what is right in regards to the law – the law of the land and the Laws of God.  He takes Mary, fully confident she is bearing the Son of God, and off they go on the back of a donkey. 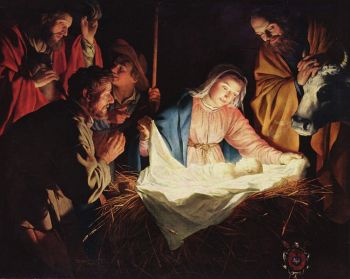 Joseph took Mary on faith, fully believing Her Son would save us all.  He loved Christ as his son, knowing all along that He was the Son of God.  Joseph should be the patron of adoption!  He accepted Mary on faith, loved her with all his heart, and took Jesus as his son. He interceded for Jesus when His life was in danger, rescuing both Mary and Christ when an angel again appeared to him and warned him in a dream to get away.  What was coming was the slaughter of the Holy Innocents.  It is the feast we celebrate on December 29th, which is our wedding anniversary.  It is another feast day that points me to adoption, and it is an ancient story about the sanctity of human life, as Herod had all male children from birth through two years of age killed, just in case one of them grew up to challenge his throne! 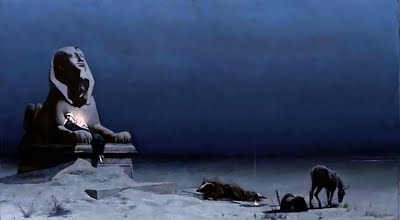 I love this painting.  The sole source of Light is the Christ Child, asleep in His Mother’s arms, atop the Sphinx.  St. Joseph is pictured asleep, next to their tethered beast, with a small fire next to him.  Quiet, peaceful, and safe.  Joseph raised Jesus as a carpenter, teaching him his trade.  He was already an old man when Christ was born, but he raised Him as best he could, giving of himself for his family.

I love that my husband and I could open our home to another son.  I thank God for this gift of life that has blessed us so immensely.  God knows how easy it is for us to love; to love each and every one of our fellow men.  He gave a wonderful example in St. Joseph and his love for Christ and the Theotokos, Mother of God.  And each year I am reminded of the blessing of life in our home.  The years are passing so much more quickly than they ever have.  I mourn the days of little feet running all over the house and fingerprints on windows and tripping over toys.  But God has gifted me with grandchildren and so the cycle of life continues!!  I give thanks for my sons, their wives, and my grandchildren.  And this last son still at home lifts my heart with his humor and his silliness.  His not-so-tidy bedroom is something I will miss in many ways, when it is his time to journey on in life.  And tomorrow it’s birthday cake, friends, and pizza! And I am sure lots of laughing and joking and high school teenagers being just that.  Time is racing past and I am trying to enjoy these fleeting moments.  St. Joseph reminds me to be faithful, unquestioning, and to just love.

Luke 2:39-40
“When Joseph and Mary had done everything required by the Law of the Lord, they returned to Galilee to their own town of Nazareth. And the child grew and became strong; he was filled with wisdom, and the grace of God was upon him.‘