Today has been a rough day. Today I had to take two dogs to the groomers. The one pictured above is Chet. He is 15 years old now. He is stubborn. He runs away. He has dementia. Today he took off, in falling snow, running away from me. I was finally able to step on his dragging lead and stop him…in snow up to my knees. I was not a happy mamma. And then he planted his behind and refused to move. So I dragged his butt so far, until he was under the snow and gave up and walked. He had yanked so hard against me, he lifted two of my fingernails. Ugh. I wasn’t going to pick him up, because he was soaking wet. I had on ankle boots and leggings – the snow was up to my knees, still falling, and I was soaked. Our other dog (God bless her) was running around, having a ball. She was teasing Chet and me, loving being in the snow, having her leash on, knowing she was going for a ride. She is over 10, but was acting like a puppy. Poca is our sweetheart. She is such a “velcro” dog – she wants to be with you and would never run away. (That’s her below). Not like Mr. Chet – Mr. Independent; Mr. Stubborn; Mr. Goes-His-Own-Way. He’s been that way since we got him at 6-weeks old. Runs away the first chance he gets. He’s done it so many times and it’s always at the most inconvenient time. Like today. I tried not to be too mad, because he has doggie dementia and a bad hip, but he sure seemed fine as I was trying to corral him today!

So we get to the groomer’s, after slipping and sliding through town. I go to get the dogs out of the back seat and notice that Mr. Chet had not moved, and he had pooped in my new car. He pooped in my car. I was beyond frustrated. And wet. The groomer, bless her, had cleaner for me, so I could clean up the mess and remove the odor. In my new car. Ugh. You’d think it was a Monday. Ha-Ha. But no, just a snowy, cold day in Alaska! 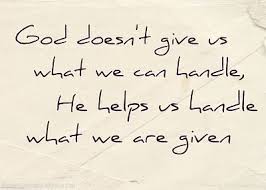 And so I called my husband. And he laughed. And and it made me laugh. And then we spoke about his mom, who is ill and was rushed to the hospital early this morning. My anger dissipated in my concern for her, and for her children, and our children. She has been an integral part of our lives for so long, that in perspective, my morning was stupid to worry about, let alone get so angry about. (Although dog poop in my car is something I can get angry about, right???).

I have been thinking so much about how invested in this world I have become. There are memes galore about wasting our time online. About forging relationships that are not real, but seem to be, because we are not out and about, investing in personal relationships. Even if you are out in the world, working every day, how well do you invest in your co-workers and people you see every day? I saw a sign a preschool posted, asking parents who were picking up their kids, to not have their phones with them. And it hit me. We all grab our phones, looking at the latest post or text, over being present to the people we are with. Some people are creating phone “stations” where guests and family alike are asked to deposit their phones when they walk in their homes. I am leaning that way.

I have been influenced by the sites I have allowed in my life and the things I give great importance to. Each day, I get my coffee and eagerly await the morning press briefing from the White House. Why is that? I don’t even check the weather! LOL! I check statuses and notices on Facebook and voila! Two hours have passed. That is insane. I read news bits after news bits. I see videos and sound bites. Are they making me a better person? Are they edifying my life? Are they helping me to achieve my daily and lifetime goals?

“Rejoice in the Lord always. I will say it again: Rejoice! Let your gentleness be obvious to everyone. The Lord is near. Be anxious for nothing, but in everything, by prayer and petition, with thanksgiving, present your requests to God. And the peace of God, which surpasses all understanding, will guard your hearts and your minds in Christ Jesus. Finally, brothers, whatever is true, whatever is honorable, whatever is right, whatever is pure, whatever is lovely, whatever is admirable—if anything is excellent or praiseworthy—think on these things. Whatever you have learned and received and heard from me, and seen in me, put these things into practice. And the God of peace will be with you.” Philippians 4: 4-9

One of the things I believe is a catalyst to the further downfall of our society are “reality shows.” I know so many people who cannot get enough. Who tape them and binge watch  them for hours on end. Who comment on reality star’s Facebook pages like they are personal friends. Who share their status’ like it is their own information or status. Who somehow relate and feel attached to these people. Most of us could never emulate the life styles of these mega-rich stars who are rich just because they are famous…and famous because they are rich. It’s so weird. I have some friends who discuss actors and actresses who appear on soap operas and care about who plays the role and who they are replacing and it is a life-or-death event. I just don’t get that. But I see it influencing people around me. I see people forming relationships with famous people, or people they have met online on some forum, or gaming site, and feel like (and treat it like) it is a real relationship. And when you look around, they don’t have very many actual friends they do things with. Or friends they call and chat up about life. Or friends they go to the movies or dinner with. No; their friends are all online. 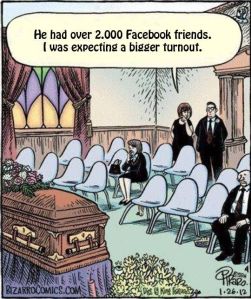 Lent is fast approaching and I am attempting to do something for myself that is so very difficult. I am going to attempt a Facebook fast. I am already getting rid of groups and news in my feed. I have blocked people who make me worse, and not the best I can be. I am endeavoring to listen to better things than what I have. I love the local Christian Radio station here called Air1. They have such great music. I am going to try to listen to that more. I am trying to adjust my online experience to one that makes me a better person. I need to stop being a slave to automation. I need to be more present to my home, taking care of it and my family, and I need to read more and watch less. We all get to a point where we realize we are sinking and not being the person we could be and that is one of those “man in the mirror moments.”

As I turn up the collar on my favorite winter coat
This wind is blowin’ my mind
I see the kids in the street, with not enough to eat
Who am I, to be blind? Pretending not to see their needs
A summer’s disregard, a broken bottle top
And a one man’s soul
They follow each other on the wind ya’ know
’Cause they got nowhere to go
That’s why I want you to know

I’ve been a victim of a selfish kind of love
It’s time that I realize
That there are some with no home, not a nickel
to loan
Could it be really me, pretending that they’re
not alone?

Those are the lyrics to the song by Michael Jackson – the Man in the Mirror. And I really feel like right now, in our world, we could all take the time to reflect on the “man in the mirror” and “make that change.” I know I need to hit the brakes before I become someone I would not like to be friends with…someone who disregards what she knows is right, what is true, what is God’s plan for me, rather than the world’s. Satan is working overtime right now, trying to destroy us all. It’s the game plan and we witless idiots are following it like it’s tattooed on our foreheads.

“For the time will come when men will not tolerate sound doctrine, but with itching ears they will gather around themselves teachers to suit their own desires. So they will turn their ears away from the truth and turn aside to myths.” 2Timothy 4:3-4

And so I would like to challenge those who read this to think about changing the direction in which they are going. Perhaps just change the way they are going, to the goal they have. My ultimate goal is to be in Paradise with the Creator of the Universe. Between then and now, my goal is to edify God and myself, by being the best person I can be, to those I bang into every day. And to that end, I need to make changes. Those changes are to what I see, watch, listen to, what I read, and those I associate with. Man, is it going to be tough. Because it is so much easier to be lazy and simple and follow the lemmings over the side of the cliff.

From Wikipedia, we find the history of the saying, “They way to hell is paved with good intentions. And it is this: The saying is thought to have originated with Saint Bernard of Clairvaux who wrote (c. 1150), “L’enfer est plein de bonnes volontés ou désirs” (hell is full of good wishes or desires). An earlier saying occurs in Virgil’s Aeneid: “facilis descensus Averno (the descent to hell is easy)”. In any respect, we know that it is far simpler to be bad/evil than it is to be good. I know being a Christian is far more challenging than being a hooligan, protesting and rioting in the streets. So we are called to transform ourselves from our lowest common denominator to our best selves. We are not guaranteed our next breath, as Fr. Justin Rose is fond of saying. And we are not. Little things get in our way and make us lesser beings…the peas in our mattress of life. We allow the setbacks to be stumbling blocks. We come to expect less of ourselves. And every, single year, the Church, in her Wisdom, gives us the period of Lent to reflect and reform ourselves. We have this 40+ day period to stop, reflect, and reform ourselves into the people God calls us to be. And I met the “man in the mirror” today and I know I need to change. 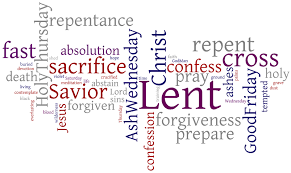