It was a tad bit nippy this year. But the snow sparkled. Which I love. We had one of the best Christmases on record. No arguments (I know, right??!!!). Presents given and received in love. Love in the air and around the house. Joy around the table. Picked up Mom and brought her with us to extended family celebrations and feasting. Even among strangers, she enjoyed the food, the noise, the kids, the conversations. Actually got home in time to watch a Christmas movie and relax before falling into bed. All in all, a truly blessed Christmas.

This year, we Nailed It! for Christmas. LOL! This show has captured my funny bone. We watched an episode while getting ready to head out to family yesterday. What I love about the show, “Nailed It!” is that people are trying. They are learning. And they compete in something they know, ahead of time, they are not particularly good at. But they try. And it provides some much-needed levity in life. We need to learn to not take ourselves so seriously. To not expect more than we are capable of. And we need to learn that sometimes our efforts are just not enough, and that we have not “nailed it,” and that we are okay with that. Life is the journey, not the destination.

As I posted in my blog about needing my weapon to be handy and ready, I realized that I had a lot of living left to do, and I was not ready to lay down and let someone else choose the end. My dash was still going on! If you are not aware, there was a eulogy given a few years back that became so famous. It spoke to the two dates on our tombstone, with the dash in the middle. The dash is the sum of our entire lives. And we need to be present in our dash, and make it count. And this year, we opted for a simpler Christmas. We chose to enjoy the moments and to live in them.

We spoke about how people were texting each other Merry Christmas wishes on their phones, and about how some people seemingly “go dark” from social media during Holidays. And I thought about that. And I thought it was a great thing. Because if we are off social media, it means we are present to the people around us, making the most of our dash. And today, as I was browsing the various social media forums, I noticed who did, and who did not, post a lot of photos. Some people had some magnificent photos of their Christmas feasts, decor, and gift giving. Some posted sayings and left it at that. Some posted pithy political junk that had nothing to do with Christmas. Others were not present on the media platforms at all. And it got me thinking. 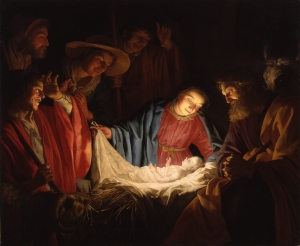 The Birth of Christ is what Christmas is all about. Even our grandchildren were talking about Jesus’ birthday this year (miracle all on its own). And I was thinking about how quiet it must have been in that lowly manger. Just the stirring of the animals, the movement of the breezes, the light from the Star. And Mary and Joseph, knowing the miracle is upon them. My eldest jokingly referred to it as the “Holy C-section” as we believe Christ “emerged” from Mary without all the travail of a traditional birth. Some believe She suffered; others believe that because She was the Mother of God, suffering would be unknown to Her. The result is the same: Christ is Born! Glorify Him! 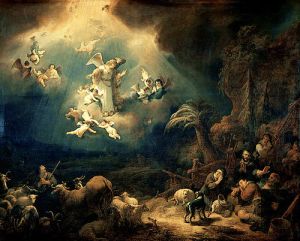 And the Shepherds, sleeping with their flock, are awoken by the songs of the Angels, directing them to the Manger where the Son of God lay, surrounded by His Glory and His Simplicity. It must have been frightening, and exciting, all at the same time. And they did not quarrel over what they had seen. They did not dally and ponder. They did not go back to sleep. They obeyed the Messengers of God and right away sought the Savior where He lay. In the book of Luke (Luke 2: 17-20):

“So they hurried off and found Mary and Joseph and the Baby, who was lying in the manger. After they had seen the Child, they spread the message they had received about Him. And all who heard it were amazed at what the shepherds said to them. But Mary treasured up all these things and pondered them in her heart. The shepherds returned, glorifying and praising God for all they had heard and seen, which was just as the angel had told them.”

“But Mary treasured up all these things and pondered them in her heart.” And I realized something profound to me: we were so busy truly living in the moment and joy of Christmas, we forgot to take photos! We have no family poses. We have no photos of our grandkids with us, or our dinner conversation around the table, or photos with my mom. We forgot. Because we were living in the moment. Our dash was full and growing. How amazing is that? And today, I thanked God for the blessing of this Christmas. And for the moments with family and friends. And for excited joy on the faces of those we loved, as they received the gifts we chose for them. For the moments of revelation when conversations were life-filled and love-filled. For the moments of no-conflict, even with disparate people gathered around a table. Even though we were not with our entire family, because of distance, we treasured moments with them of conversation and loving wishes given and received. We were so very blessed this year. So blessed.

And today, as the world returns to its rhythms and its chaos, my prayer for everyone is that we recall the simplicity of the moments in the Stable. When Mary rejoiced in Her Newborn Son, held lovingly in Her arms. When Joseph looked lovingly at His Wife and the Son He would raise to become a Man like no other. When the Shepherds arrived, after having been instructed by Angels – a choir of Angels – singing, “Glory to God in the Highest and on earth, Goodwill and Peace among men.” All in the quiet of a December night, so long ago. And as you gaze lovingly at the spent remnants of a day sharing with family and friends, smile for a moment, thinking of the Birth of the Son of God, Who came to save us all. 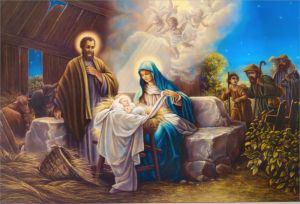 2 thoughts on ““…and pondered them in Her heart.””