My son is entering his senior year of high school. He is our last child out of the nest. And bookkeeping, or maintaining his records, has become paramount because the next step is college/trade school/academies. He plans to become a fire fighter, we just are not sure which route he will take to get there. So we have to be prepared for any avenue he may choose to take.

I took this personality test, as I posted about before, and I am called an “Advocate.” One of the traits it spoke about was having a hard time choosing a career path, because I can see 7 of them in front of me. I chuckled at that because I changed my major in college 4 times and have had careers that are so disparate that you would not think the same person did all of them. And I admire my son for choosing to become a fire fighter. Once he chose this path, he has not wavered from it once. And now that we are looking forward, he is choosing the same path, but finding alternate ways of getting there. Me? I would have gotten all caught up on the many options, many pathways. But he is singular in that he sees his goal; his pathways all take him to the same place. Mine have had me all over the map.

The one thing that has been consistent for me is my unfailing faith in God. I have meandered through methods of worshipping Him, but my faith has been steadfast. My path has been lit with faith since I was young. I sought Him out in my life, on my own initiative, since I was in grade school. I have been to so many denominations and faith experiences. It has made me who I am. My favorite (and enduring) major in college was Forensic Anthropology with a minor in Biblical Archeology. I learned the holistic approach to looking at peoples and cultures, and then I learned the physicality of our rich biblical history. As a people of faith, we are so blessed by our history, and the physical records of where we have been, as a people, as humanity.

The bombing of so many biblically important sites in the Middle East just breaks my heart. I do not need them as a proof of my faith and its history, but I cry each time one is destroyed. The photo above is of the aftermath of the bombing of the burial site of Jonah from the Old Testament. There are fewer and fewer sites that are intact and this strikes at all of our humanity, not just our faith. This was a record of our growth as people; it is part of the history of mankind. And it has been reduced to rubble.

I work diligently to be sure my children’s school records are accurate and complete. I may lag behind a few moms in turning my quarterly and year-end samples and grades in, but I am thorough and my teachers/advisors know they will get it and it will be complete. They have yet to have to badger me. I have been schooling my children since 1992 and I have gotten fairly decent at it! Records are important. Recently our son had his property surveyed. Survey lines determine how much we own. We know where we can plant trees or put up fences, or dig that pool. It also determines your property tax liability. Records are important. One of my many jobs was working for the County Auditor-Controller/Recorder in the Recorder’s office. It was so interesting. And keeping everything in pristine, exacting conditions was a requirement of my job. It was awesome to see titles and deeds dating back to the early 1800s, still being kept on record, and a reward of diligent record keeping.

Records matter. What we say, matters. We can offer opinions and we can claim expertise, but we cannot/should not speak untruth about anyone, at any time. Choosing to live your life a certain way, always keeping to your path and the path of Truth, protects you from slander or libel.  Gossip can be such a hurtful thing, especially when it is repeated in the public square. Quite often there is a grain of truth in there somewhere, but it is so obsfucated by the flotsam and jetsam of lies, we cannot even glimpse it. Nowadays we record everything using our cell phones. The cameras in cell phones are much better than the stand-alone camera in my desk drawer – which is why it is in the drawer. We can record our voices and email them or text them to people. I love to sing Happy Birthday to my grandkids and send it via text for their parents to play for them. We can video chat with people thousands of miles away. We can record events happening in front of us. There are often thousands of photos of the same event, thanks to everyone whipping out their cell phones. (How did we survive before them???). But keeping things neat and orderly, keeping our records safe, has been something we have been doing for one another for thousands of years. Gossip and slander have been with us since man was created; it came right along with our free will. And the record of it began in the book of Genesis, in the Bible:

“Now the serpent was more crafty than any of the wild animals the Lord God had made. He said to the woman, “Did God really say, ‘You must not eat from any tree in the garden’?” The woman said to the serpent, “We may eat fruit from the trees in the garden, but God did say, ‘You must not eat fruit from the tree that is in the middle of the garden, and you must not touch it, or you will die.’ “You will not certainly die,” the serpent said to the woman. God knows that in the day you eat from it your eyes will be opened, and you will be like God, knowing good and evil.” When the woman saw that the tree was good for food, and that it was a delight to the eyes, and that the tree was desirable to make one wise, she took from its fruit and ate; and she gave also to her husband with her, and he ate.” (Genesis 3:1-6)

My husband and I go around and around on this because it is called the Sin of Adam, but he insists that Eve is the one who listened to the evil lies and acted on them. But the Church fathers always point out that Adam was the head of the family and the first one created by God; he had been with God a long time before Eve was created. He did not lead her; he followed her. So his sin was in that he did not say no to evil, but allowed evil to become a part of their lives, and consequently, our lives. Because of listening to lies, Adam and Eve were kicked out of the Garden of Eden.  When we listen to lies, share lies, and allow evil to win, we are sinning against God. And each and every time, we also sin against our brother. We can lead one another into a sinful state, a state wherein we exist outside of God, just by allowing evil to win.

Proverbs 18:21 tells us that “The tongue has the power of life and death, and those who love it will eat its fruit.” The cross-reference in the New Testament is: “For by your words you will be acquitted, and by your words you will be condemned;” which is found in Matthew 12:37. The corresponding commentary says, “Death and life are in the power of the tongue – This may apply to all men. Many have lost their lives by their tongue, and some have saved their lives by it: but it applies most forcibly to public pleaders; on many of their tongues hangs life or death.” 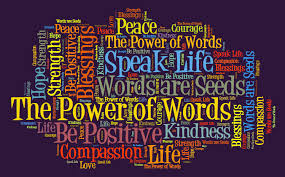 The power of our words can assist us, or it can deter us from our goals. We have a record that remains even after we become silent. As many politicians know (public pleaders, as in the commentary above) and have known for ages, our words can kill our career, our public life. Records can be blown up, as many of our historical records have been. But God sees all of this. He is waiting for us to choose a path that leads straight to Him. A pathway filled with love, determination, honesty, and goodwill. He asks us,

“My son, give attention to my words; incline your ear to my sayings. Do not let them depart from your sight; keep them in the midst of your heart. For they are life to those who find them and health to all their body. Watch over your heart with all diligence, for from it flow the springs of life. Put away from you a deceitful mouth and put devious speech far from you. Let your eyes look directly ahead and let your gaze be fixed straight in front of you. Watch the path of your feet and all your ways will be established. Do not turn to the right nor to the left; turn your foot from evil.” Proverbs 4:20-27 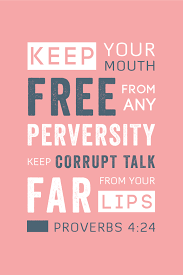