I’m all about planning for Pascha this year. I am excited for it. I got my basket (huge step) and my basket cover (gorgeous), my Ukrainian egg wraps, a recipe for dying eggs red (my last attempt went so-so), and a recipe for Pascha bread.  I am still looking at cheese recipes!  A friend is getting me authentic sausage from back east, too.  I am hoping to get it all together soon.  There is quite a list of what you traditionally fill your baskets with in the Russian/Slavic world!  I took down the last of our interior lights last night (well, okay, I directed the effort as my husband took them down!) and all of our Christmas stuff is gone; our windows look naked!  I laughed because we feel like spring is approaching, but we had a surprise snow storm this week that dumped 14″ on us in one night.  We have a lot of snow, with more coming in the next few days.  So that part of planning for Pascha is rather ironic!  Ha-Ha! 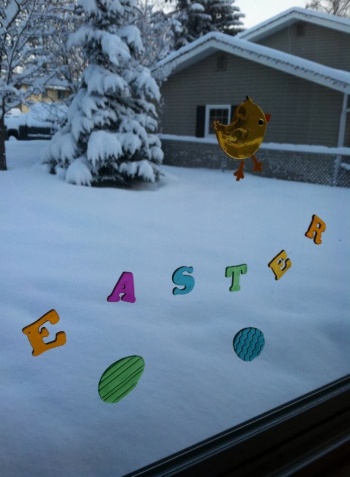 My kids tease me about my window “jellies.”  I have them for pretty much every holiday!  And I took down Christmas and up goes Easter!  And when we got that snowstorm on Friday, this shot through the front window just made me smile.  There is an old saying that goes something like, “Give God a laugh; tell Him your plans.”  Here I am planning for spring, dealing with temps in the 40s and slushy, mushy rain, running to Pre-Sanctified Liturgy, only to come out about an hour later to a snow storm and temps down around 24-degrees!  I couldn’t believe it!  The drive home was so not fun! But I remembered that saying and know that God is in charge!

So today, I found some recipes for dying the eggs red.  And I thought about an experience a year or two ago, when we were attending a Roman Church in WA at Easter. We took a basket of red eggs to share, as that had been our tradition from years past as Byzantine Catholics.  No one had seen red eggs before.  I laid them at the foot of the altar in a basket and people just stared at me.  (We always stood out – my husband is a Melkite deacon and always dressed for “Mass” in his Sticharion [outer tunic] and hat, called a skoufus. We do not melt into the crowd anyway!) I had told our priest I was going to do it and he thought it was an excellent idea and gave me permission beforehand.  At the donut and coffee hour afterwards, he silenced everyone and handed me a microphone, where I explained the tradition and we passed around eggs to everyone.  Luckily I had made enough!  But no one had ever heard the story, nor knew of the tradition. I had some elaborately decorated ones, too, in the Slavic tradition, and those were also foreign to the parish community.

And it made me sad.  Sad because it seems like we’re becoming a beige country. And also sad because very few people are aware of other traditions other than those egg dying kits you buy in the grocery stores!  I have gone that route, with the little tablets, vinegar in bowls…the dye leaching into clothes and carpeting when you want to hide them.  Naturally dyed eggs don’t run! Wrapped eggs aren’t dyed! How easy is that?  And, there is so much more out there. The traditions and expressions of our faith are as diverse as the countries Christianity is found in.  And it is NOT beige! 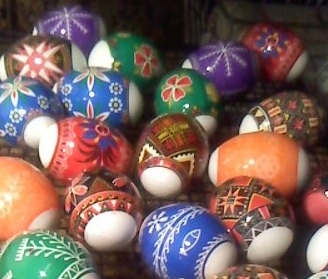 No one wants to celebrate our ethnic diversity, unless of course, it is a PC ethnicity.  Today there are articles abounding over the controversy of Heineken, Guinness, and Sam Adams beers pulling out of the St. Patrick’s Day Parade in New York because the parade organizers decided long ago that the parade is to honor St. Patrick and no other banners, except those honoring the Saint, can be carried.  Some LGBT groups wanted to be included and wanted to carry their own banners. The organizers said they can walk in the parade, but the parade is about the Saint. Period. Which happens to be a 1st Amendment right! So, because the parade is not inclusive enough, the beer companies pulled their sponsorship.  The Catholic League is calling for a boycott of those brands.

I wish everyone would go back to the days when we could all be proud of where we were from, to acknowledge and appreciate those differences, and share in celebrating them.  Today, around the world, everyone wears green and is Irish, just for a day.  What’s wrong with having fun with that and learning to like corned beef and cabbage (not my thing, I have to admit)?  The traditions that make up who we are as a nation, and who we are as a Church, are to be celebrated, not boycotted.  We need to savor and hold onto our cultures.  The world is becoming beige, as races and cultures intermarry and people immigrate (legally) from country to country.  It is sad that some people have to use these tools like Ancestry.com to find out where they come from.  Our ethnic parishes, as it becomes the third generation after the initial immigrants arrived, are finding their youth moving away and marrying outside their ethnicity and religious practices.  Beige.  It has never been a favorite color of mine. We celebrate where we come from, but are ever mindful of who we are in faith:

“For now that you have faith in Christ you are all sons of God. All of you who were baptized “into” Christ have put on the family likeness of Christ. Gone is the distinction between Jew and Greek, slave and free man, male and female—you are all one in Christ Jesus. And if you belong to Christ, you are true descendants of Abraham, you are true heirs of his promise.” (Gal 3:28-26)

One of my favorite traditions in the Melkite Church’s celebration of Pascha is when we sing, “Christ is risen! He is truly risen!” or “Al Masiah Qaam! Haqqan Qaam! / Al Massihu Qam! Haqqan Qam!” or “Christos Anesti! Alithos Anesti!”.  And we greet each other with “Glory to His Resurrection on the Third Day! We glorify His Resurrection on the Third Day!”  It becomes so loud and boisterous inside that Church – poor neighbors!  The photo above is of everyone re-entering the Church under the empty Tomb of Christ.  The song that then gets everyone going is, “Christ is risen from the dead and by His death He has trampled upon death, and has given life to those who are in the tombs!”  Boy, you have never experienced a Pascha (Easter) Vigil until you have experienced the ones celebrated in our old parish!  The lamps are swinging, it’s after 1:00 a.m., everyone is tired and their voices are hoarse, but they sing it as loud as they can, and everyone is laughing and Fr. Justin is running up and down the aisles swinging that incense!  It has to be one of the most joyous experiences I have ever had.  Am I Arabic? Nope! Scots/English girl here.  But can I embrace the spiritual, cultural, and social customs of an ethnic parish? You bet I can! I relish in it.  Because to me, we are sharing what makes our Church truly universal.  And there is absolutely nothing to compare to the Divine Liturgy of St. John Chrysostom, a midnight Easter Vigil, Fr. Justin’s exhausted enthusiasm, and the smell of MEAT cooking just yards away – a smell no incense can wipe out after 40 days of fasting; trust me on that.

So this year, our first year up here in Alaska, celebrating in a Byzantine parish, I am learning all new traditions.  And I am loving it.  Why? Because my world just expanded again.  I didn’t boycott because they don’t use Melkite chant or the Arabic and Greek languages, nor fast in exactly the same way.  I am, instead, learning some Slavonic and trying hard to wrap my head around some Russian.  I am not leaving one behind and embracing one in its place, I am adding to my religious experience; my repertoire, if you will.  This process of Theosis, or my salvation, is a long one. It will take my eternity!  God will take us on some wild rides in our journey, if we allow it to happen. I may not celebrate wearing all green today, nor will I be breaking my fast with corned beef, but I sure can support those who do. 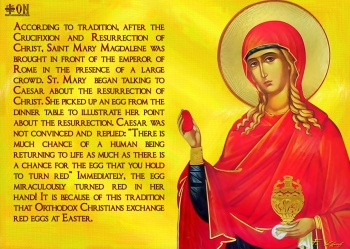 The tradition of red eggs at Easter is explained above.  When two Christians greet one another at Easter, it is with an egg held in their hand (preferably hard boiled and colored/decorated!).  They clang eggs, symbolizing the opening of the Tomb, and they say to one another, “Christ is risen! He is truly risen!”  (The one whose egg does not break is considered the “winner” and goes on, cracking eggs with others in greeting until their egg is broken.  Then they eat that one and get another one!) I think sharing something with people that comes from another culture makes us better; it makes our faith more universal, or catholic.  And God came for all peoples, in all places, not just a select few. He came for me! And I am getting excited! Next try is dying eggs using yellow onion skins…I’ll let you know how they come out!!