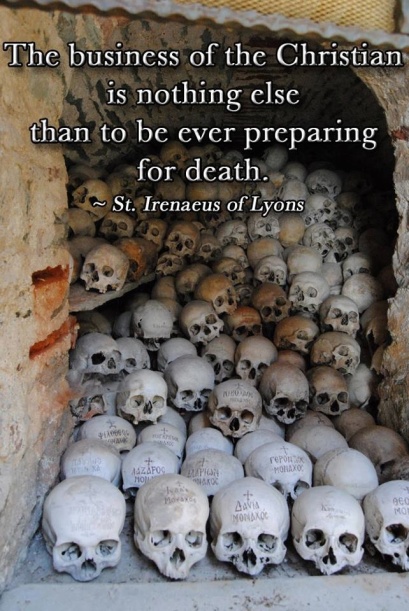 To some, most especially my Protestant friends and family members, the practice of many Orthodox and Byzantines of having an “ossuary” (An ossuary is a chest, building, well, or site made to serve as the final resting place of human skeletal remains. They are frequently used where burial space is scarce. A body is first buried in a temporary grave, then after some years the skeletal remains are removed and placed in an ossuary. The greatly reduced space taken up by an ossuary means that it is possible to store the remains of many more people in a single tomb than if the original coffins were left as is) to remember the dead seems highly morbid or gross. In addition to that, many of the skulls kept in an ossuary are engraved with the deceased’s name and birth/death information.  In many places around the world, cemeteries are a luxury that cannot be afford to a particular place or situation, or perhaps for financial reasons.  In the USA, we often have crypts or mausoleums where we inter our deceased in caskets.  Lots of people do not want to be placed in the ground, or perhaps they choose cremation.  In Orthodoxy in particular, we do not cremate.  In the Byzantine tradition,  it is not favored, but is allowable.  There has been a return, in recent years, to simplicity in burial and to even “green” caskets, where the casket actually decomposes over the years so as to not add to the landfill and allow the remains to be returned “from whence they came,” as in “ashes to ashes, and dust to dust.”  I met an incredible man at a homeschool conference a couple of years ago. He was a boat maker and he loved wood carving and working with wood. He watched Pope John Paul II’s funeral on TV and was moved by the simplicity of his casket.  It moved him so much, he relocated his family to Vashon Island in Washington state and providing these amazing caskets has become his life’s work. (You can find him at http://www.mariancaskets.com/ and I highly recommend his magnificent and simple caskets). When I first saw one at our conference up here, I stood next to it and wept – the simplicity and beauty were overwhelming. It seems odd to recommend someone get in touch with a casket maker, even if there is no impending death, but these caskets are one-of-a-kind and are each handmade with craftsman-like attention to detail.  Very worth planning for!!

Today marks one year since the death of my father-in-law.  He was diagnosed with cancer and exactly (I mean to the day of his diagnosis) two months later, he had passed on into life eternal. (May his memory be eternal).  He changed quite dramatically in the small period of time in which he was ill.  There were good days and there were some pretty bad days. Through days of pain, his demeanor was that of a man who knew his days were few, and was peaceful.  Most importantly to all of us, he had made peace with God, and it was evident to all of us around him.  [A side note in all this was that he even encouraged his wife to get rid of things in their home, saying it was just “stuff” – a HUGE thing in our family.] He also actively participated in the choices that were made regarding his last days, his burial, and his internment.  He was calm and resigned, but more importantly, he was peaceful, and at times even joyful.  He gathered his family around him, he expressed his love for each of them, and he said his goodbyes.  He was the eldest of 10 children and each of his siblings that could, came to see him and spend a short amount of time with him, bidding him farewell. He had his wife, sons and daughter all around him at one time, which was miraculous considering we resided in several states, and had so many complications in getting together.  (My sister-in-law had just given birth to twins, but was able to fly out to spend some time with her dad).  All of my sons were there, and my oldest son brought his wife and newborn baby, so that my father-in-law could meet his great-grandson.  It was beautiful.  And when he took his last breath, the Kaiser world was rocked.  He had, probably without even realizing it, become the planet we all revolved around…his siblings, his grandchildren, god children, nieces and nephews, various in-laws and outlaws, and friends he’d kept since early childhood.  His funeral was beautiful and his internment quiet and peaceful.  He was laid to rest in peace, and it was a celebration of his life.

The year since his death has been one of so many wonderful occurrences in our immediate family – we’ve had the college graduation and wedding of our middle son, and now his impending fatherhood.  Our oldest son’s firstborn son celebrated his first birthday a month ago, and now we are awaiting the birth of his second child.  Our youngest son became a member of CAP and entered his middle teens going full blast, challenging us and keeping us on our toes every day!  My husband changed jobs late last year, is changing jobs again, and now we are moving thousands of miles from here. For me, it was a big year in that I started blogging! Our lives are in full swing.

My father-in-law has left us a legacy, and a lesson.  A priest we know used to love to say, “You are not guaranteed your next breath.”  I believe that when my father-in-law breathed that last breath, he was willingly walking towards his eternity in peace and fully engaged in the process of “meeting his Maker.”  I pray that I, too, keep my eye on meeting my maker and that each moment of every choice laid before me is spent spiritually aware and is profitable to my salvation.  I was also shown through the experience of the death of my father-in-law, that family is the single most important thing Our Lord gave us.  Everything we learn about who we are, everything that we have been given, has come through our family.  I am now determined to keep family close by me, and I never tire of telling my family that I love them.  Lent is always a rough time of year; it is especially rough this year because we are in mourning, at the one-year anniversary of someone who was pivotal in so many of our lives.  My husband, youngest son, and I had lunch together today and my husband was able to share tidbits with our son about his father.  And he was able to smile; we even laughed a little bit.  It is good to smile and laugh when we contemplate those who have gone before us, rather than always to mourn.  Today our middle son had an interview and it was a little nerve-wracking (he really wants this job).  We chatted a little about invoking the saint names of my father-in-law and asking them to intercede for my son. Although a year ago today my son was sitting with him as he passed away, today he can ask his grandpa to spiritually sit with him in his interview.  What a wonderful gift!!  Our faith is not an easy thing, but it is also such a comfort on days like today.

So today I remember my father-in-law and ask his prayers for the family he has left behind. I pray for his soul and wish him peace and repose.  I also am more focused on my own path to salvation, as this time of Lent gives me so much to reflect upon and pray about. God is working in our lives and He has a plan for us.  When we contemplate our own death in light of those we love who’ve gone before us, it makes our own struggle seem much more real, and very timely.  The days grow shorter for each of us and I pray that each day I have, God will manifest Himself in me more and more, and that everyone will know I am a Christian, by the love that emanates from me towards all those around me.  My prayers go out today to our family-at-large and “May the souls of the faithful departed rest in peace. Amen.”  Memory eternal, Joe…. 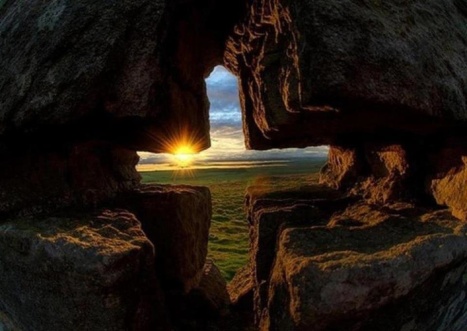 2 thoughts on ““There is no better teacher than death.””