“…and the more resolutely, the more constantly, your heart is turned towards God and His saints the more it will be enlightened, purified, and vivified”.  “Be true in heart always and everywhere, and you will always and everywhere have peace, but especially be true in your converse with God and the saints, “because the spirit is truth.” St. John of Kronstadt

Today is the March for Life in Washington, D.C. and I was glancing through the morning shows on TV and while I was looking, at least, not one announcer or news reporter mentioned it.  To give them the benefit of a doubt, I did not watch every channel, all morning long.  But as I was surfing channels, no one said a thing about it.  Oh, they discussed whether or not Beyonce lip-synced the National Anthem at the Inauguration, but not one word about the March for Life.

It is becoming more and more obvious that the media chooses to ignore things that are not on their own agenda.  I found one channel, and only one, that was running coverage of the March and it was EWTN – the Catholic channel.  As St. John said above, “be true in heart always and everywhere…” and I think that the public arena is being true to their misguided hearts. And it makes me sad.  I read today some statements from the various Orthodox Fathers on abortion and it has been clear, since the Didache itself, that all life is precious.  (The Didache (pron.: /ˈdɪdəkiː/; Koine Greek: Διδαχή) or The Teaching of the Twelve Apostles (Didachē means “Teaching”) is a brief early Christian treatise, dated by most scholars to the late first or early second century).  “You shall not slay the child by abortions.”

Many of our Church Fathers addressed abortion in the centuries leading up to the Modern Era, but people are just not in tune to the fact that all life is precious. I know there will be many people who do not want to deal with this issue, and I may get bombarded with comments because of my pro-life stance, but for me, this issue tugs at the core of our character, as a culture.  If each and every pro life person did just one act to save one life, then perhaps the millions of babies killed each year would be much less.  The very least those of us who are pro life can do is pray.  And prayer is a major portion of every war we face – and like it or not, the battle for life is a war, not just a battle.  The reason I say this is because we have a generation raised since Roe v Wade who have no concept of living without abortion and see it as a normal choice of birth control.

One of my favorite movies is Cheaper by the Dozen, filmed in 1950, and starring one of my favorite actresses, Myrna Loy. In the movie, she stars as the wife of an efficiency expert and mother of 12 children.  At one point, a woman from Planned Parenthood comes to see her because she has heard about her and her work, not knowing she is also mothering 12 children.  The scene devolves into laughter as her husband and their children make their entrances and the PP rep realizes that it is not a home for wayward youth, but rather, a family. She is horrified and leaves the house rather rapidly.  That scene has stayed with me my whole life. 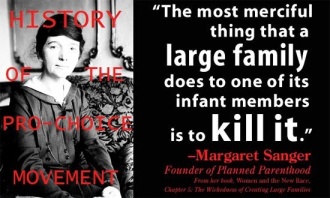 And to think that most people believe that Margaret Sanger had their health concerns at the forefront.  She most certainly did not.  She is one of the reasons abortion is so wide-spread and so accepted. 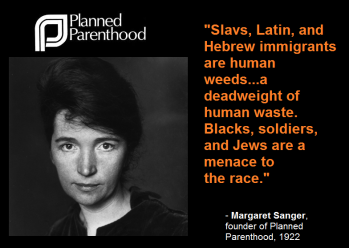 The antithesis of what the Church teaches in regards to the sanctity of life is what Margaret Sanger and Planned Parenthood are all about.  She was a devotee of Adolf Hitler… 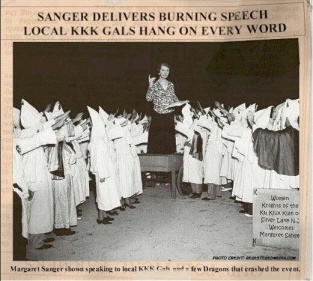 That one woman did more for the downsizing of races, other than white, than any other single human being has done.  Our Lord spoke to having the “faith of a mustard seed” and that if we just believe, we can change the world.  As much can be said for people like Margaret Sanger – one person has indeed changed a culture and a world view.

We need to begin, once again to turn our hearts to God, to stop this awful assault on humanity, to inherently change the way we all view life, and to turn our culture around before we value just things, with no regard to humanity. 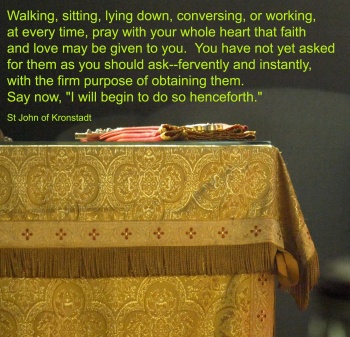 Once again, St. John Kronstadt tells us what we need to do, and to do it “henceforth.” The fight for the unborn is just symptomatic of what we have devolved into.  My mom, who is 83, taught me how to love as a mother loves. I have no doubt that my mother would die for me…she dove into a brawl when I was attacked at just 13 years old! All 4’10” of her!  She is brutally defensive and protective of her children, even now.  But she also believes that women have the right to “control their own bodies” and this is where she and I differ.  And it is endemic of how the vast majority of people in our country must believe, or Roe v Wade would be an historical event, not something we live with.

So as a devout Christian and pro life Byzantine Catholic, I choose to light a candle of faith and pray that flame will be spread to others, and then others will spread their flame. I think it is time we just said “no” to the many promptings of evil in our culture and stood for the faith Christ has passed down to us.  Pray…be a prayer warrior for those who cannot care for themselves and are the most vulnerable among us.  This is a gift, this faith we share.  And it is our privilege and our duty to share it with others.  Today, as millions march on Washington DC to share this love of life, let us all join with them, at least in prayer.  Let us share our light of faith and perhaps we can change history. 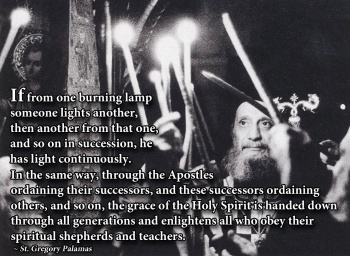